The Giant Panda is a native bear to China and one of the most recognizable creatures on the planet today. 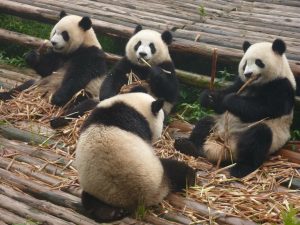 Giant Pandas Spend Most Of Their Time Collecting And Eating Bamboo

The white-and-black native bear of China needs little introduction. With its striking, and pleasant appearance and generally pleasant disposition, the giant panda has become a forerunner for all vulnerable animal species worldwide.

The name ‘giant panda’ has become its most commonly used name so as to distinguish it from the unrelated but closely named red panda.

Though it is a carnivore, its preferred diet is about 99 percent bamboo.

The Red Panda is a beautiful creature native to parts of China and the Himalayas.

The Red Panda is a beautiful, little creature native to the eastern Himalayas and southwestern China. This mammal is just slightly larger than the average domestic cat and it’s easily recognized by its thick red/russet colored fur, long and very bushy tail, and bear-like body.

Red pandas are also commonly referred to as lesser panda in deference to the much larger giant panda. These are very acrobatic animals with expert tree-climbing skills.

It is arboreal (lives predominantly in trees), typically solitary, and mostly active from dusk to dawn.

What Caused The Giant Panda To Become Endangered In The First Place?

The threat of extinction as regards the beloved giant panda became a reality that generated much concern in the international community and among conservation groups.

These creatures were exploited and hunted by humans to the extent that they are now restricted to just a handful of areas in their native China.

Today, though this animal has been downgraded from Endangered to Vulnerable by the IUCN, there are still fewer than 2000 of them in existence and this sobering fact leads us to question why there are so few of them left.

Here are the reasons why the giant panda became endangered.

Is the giant panda now safe from extinction? Let’s find out. 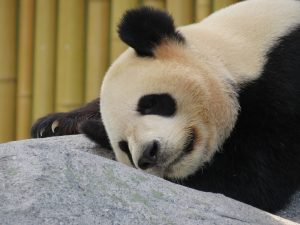 It’s a good and welcoming report for one of the Earth’s most endangered wildlife: the giant panda.

The giant panda moved down the ladder from the most endangered species to vulnerable, and this shows the power of combined efforts in rescuing some of the world’s defenseless heritage.

According to the International Union for Conversation of Nature (IUCN), there is a positive difference in the status of the big giant.

A brief look at the history of the giant panda and how it became so popular worldwide.

The giant panda, or ‘black and white cat-foot’ (going by its scientific name Ailuropoda melanoleuca), is a well-known animal worldwide. In fact, there are few other animals alive today that generate as much attention or command as much care as this mammal does.

But why is that so?

After all, it doesn’t seem to do much and spends most of its day and a chunk of its lifetime collecting and chewing bamboo.

Practically everyone wants to see giant pandas up close and personal. Here are some spots where you can do just that. 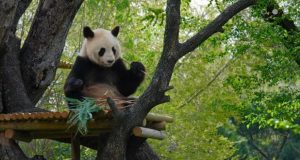 There’s a common trend about the giant panda wherever it’s found: everyone wants to see it! And, these adorable looking creatures are so rare and endangered that people don’t mind watching the tiniest details about their daily lives.

They’re easily the main attraction in each of these locations listed below though their spend most of the day eating lots of bamboo. In all the places they live worldwide, no expense has been spared to create an environment very similar to what they would have in the wild.

They may look cute and cuddly but the following stories of giant panda attacks call for caution.

The Giant Panda Is Undeniably Cute But It Packs A Fearful Bite.

When most people think of the giant panda (Ailuropoda melanoleuca), what comes to mind is a chubby, gentle, huggable, and absolutely cute creature. They assume these are docile, lumbering creatures with a funny habit of sneezing.

That’s not completely untrue: they are cute and chubby, and they sneeze a lot. But gentle and huggable, maybe not so much.