If you’re considering working as a Giant Panda Volunteer, here are a few tips that will make the experience more rewarding.

Watching a Giant Panda is one thing but we’ll bet most people would jump at a chance to come much closer to these beautiful creatures in a more natural setting. What about actually caring for and cuddly a baby panda?

Well, if your interest is piqued then this post is for you.

Thanks to the efforts of the Chinese authorities, international governments and people just like you, giant pandas are now edging further away from extinction. But, its a very labor intensive

Show your loved ones how much you care with any of these unique Gifts For Giant Panda Lovers.

Are you looking for something unique and memorable for that special panda-lover in your life? Great! Relax and kick your shoes off because you have just come to the right place.

Or, even if you’re just searching for something different for your collection, clicking through our list of the best gifts for Giant Panda lovers is a guarantee that you won’t go away empty-handed.

Because – we’ve got something for everyone!

From costumes to educational toys, jewelry, and everything else in-between, below is our

The International Giant Panda breeding program has been on for 30 years now. Why is it still facing so many challenges to date? 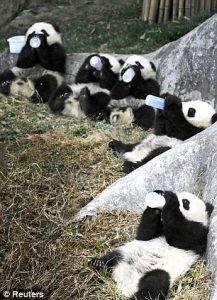 Captive Pandas Are Waited On Hand-And-Foot. How Can They Hope To Survive In The Wild? (Photo: Reuters/DailyMail)

Though Giant Pandas may not be the most endangered species in the world, experts say sustainable steps need to be taken to ensure that these animals are protected from extinction.

These concerns are largely linked to the captive giant panda breeding program. In this program, the aim is to raise pandas and train them to survive in the wild. It started back in 1987 with six wild pandas. Since those pioneer bears were captured to date, the breeding program has raised more than 300 animals.

Unfortunately, only five 5 have been released into the wild. Out of that five, just 3 were able to

Although the IUCN has officially downgraded the panda bear from Endangered to Vulnerable, it’s not yet “all clear” for the beloved and widely popular bear.

A serious challenge the Giant Panda (Ailuropoda Melanoleuca) continues to face is that of an extremely low and difficult birth rate.

As a matter of fact, giant panda reproduction is so complicated that it has become the topic of many jokes worldwide. The issue is even worse when China’s iconic bears are held in captivity.

There are just about 2,000 of these bears in the world today and though the numbers are