There are so many common misconceptions about these animals but you can learn up to 21 cool facts about pandas here. 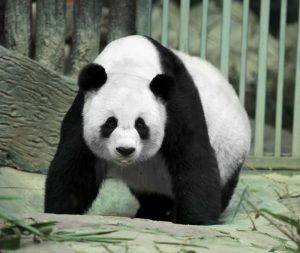 A Giant Panda With The Characteristic Black And White Coloring.

Much of what people know about pandas is information gathered from studying them in captivity. But, recent evidence shows that their behavior in captivity is different from what they display in the wild deep in the bamboo forests of China.

In addition, though they appear to lack natural predators, human activities like poaching, deforestation and habitat destruction have severely affected their well-being and numbers.

Species And Diversity Of Pandas

1) There are two types of pandas: the giant panda (black/white fur or brown/white fur) and the red panda (red fur). Though they belong to the order Carnivora, they are actually 99% omnivores in their mode of nutrition.

4) The red panda is often called red cat-bear or ‘lesser’ panda because of its small size compared to the giant panda.

5) All pandas originate from China and wherever they are found in the world, they are there on ‘loan’ from China.

6) Strangely, a group of pandas is called an embarrassment!

7) It’s estimated that they can live up to 20 years in the wild and about 30 years in captivity.

Pandas are solitary and peaceful creatures but they will attack if threatened.

8) Giant pandas will spend more than half their lifetime focused on their favorite pastime: collecting, preparing and eating bamboo.

9) These magnificent mammals have the digestive systems of carnivores but they spend up to 12 hours daily eating bamboo. Though, they will occasionally eat small animals and fish, bamboo essentially makes up 99 percent of their diet.

Young pandas feed on the poop of their mothers (they can poop almost 40 times a day).

10) They have one of the highest bite force of land carnivores. They need this to be able to chew through the tough bamboo stems they eat all the time. 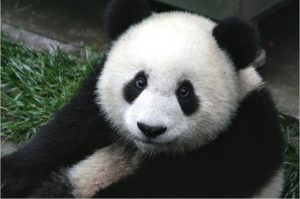 11) Pandas in captivity are known to lack interest in sexual activity but that changes significantly in the wild. They can mate up to 50 times within a day.

12) Female pandas are fertile for just 3 days a year and they give birth to one or two cubs every two years. As a result, they have a very low birth rate.

13) Whenever a baby panda is born anywhere in the world, it’s shipped back to china to help expand the gene pool.

14) Baby pandas are born pink in color and measure about 15 cm. Also, they are born blind and will open their eyes after six to eight weeks from birth. Although there have been several efforts to raise pandas in a controlled environment, sadly, more than 60 percent of pandas born in captivity will die within a week.

There is ongoing research to study microbes in panda waste and determine their use in creating biofuels from bamboo and other plant sources. 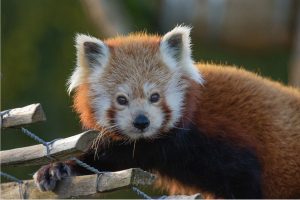 The Red Panda Is Considered As One Of The Cutest Creatures On Earth.

17) They have been on earth for millions years now and the West first knew about their existence in 1869.

Other Facts About Pandas

20) ‘Panda diplomacy’ refers to the practice where China would give out pandas as gifts to American and Japanese zoos to foster cultural exchange. Though this practice has ended now.

21) China offers pandas to other countries on 10-year loans and an annual fee of up to US$1,000,000 per year. This money is earmarked for panda conservation efforts.