Panda Diplomacy is surprisingly an important diplomatic tool between China and many nations today.

Giant Pandas are not merely regarded as one of the most adorable and most protected species on the planet. These bears have contributed a lot in terms of fostering close relations through international diplomacy. Panda Diplomacy is the term used to refer to China’s gifting of giant pandas to other countries.

This practice dates as far back as the Tang Dynasty (the Golden Age). In more modern times, from 1958 to 1982, China has gifted 23 pandas to nine countries in total.

The bears were very well received and loved, and became accepted as a means of improving trade and cultural interaction between two nations. Since the 1950s to date, China has been using these pandas as instruments of their initiative to harness peaceful partnerships. There’s also the occasional benefit of favorable agreements and business deals.

The Chinese government gave two pandas, Ling-Ling and Hsing-Hsing, to the US government in 1972 after then President, Richard Nixon’s, historic visit to China. Subsequently, the First Lady donated the pandas to the National Zoo in Washington.

They were received in an official ceremony with over 20,000 visitors flocking to see the        pandas that first day. Thereafter, another 1.1 million visitors came to see them within the first year they were in the United States. The pandas were extremely popular among Americans and were widely seen as a diplomatic success.

The “American” pandas were so successful, then British Prime Minister, Edward Heath, also asked for pandas during a 1971 visit to China. Not long afterwards, the bears Chia-Chia and Ching-Ching arrived at the London Zoo. 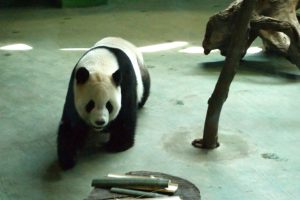 In 2005, the Communist Party of China offered two pandas as gifts to the people of Taiwan. The Taiwanese people were in support of receiving the pandas. But there was stiff opposition from the Republic of China (ROC) government of Taiwan. They interpreted the gesture as a ploy to thwart Taiwanese independence.

Eventually, by 2008 a new government accepted the pandas, and they were later named Tuan Tuan and Yuan Yuan. Tuan Tuan means  “reunion” in Mandarin.

In a visit by Hu Jintao to Japan in May 2008, China announced the loan of two pandas to Japan. The President remarked that the bears were a symbol of the friendly ties between Japan and China.

5) With The UK Again

In more recent times, the United Kingdom, through its zoo in Edinburgh, loaned two pandas back in 2011. This allowed the two nations to sign trade deals involving salmon, renewable energy and Land Rover automobiles.

The benefit of the salmon deal, in all actuality, was originally proposed by Norway. But because they awarded a Nobel Peace Prize to a supposed Chinese rebel, Liu Xiaobo, the deal could not progress between the two nations.

Panda Diplomacy existed as far back as the Tang Dynasty (618 – 907) and started with the Empress Wu Zetian sending a pair of panda bears to the Japanese emperor.

Why Is Panda Diplomacy So Important?

China is seen both as a friend and a threat by its neighboring regions, and its power is felt even by those thousands of miles away. Because of this, transitioning from a “hard power” into a “soft power” has taken place. And this is largely due to the gifting of these pandas.

Ever since Empress Wu Zeitan of the Tang Dynasty sent two in the 7th Century, China has continued the tradition.  Even during the height of the second world war, the “panda nation” has been delivering their pride to several allies such as the United States, North Korea, France, Mexico, Spain, and the then Soviet Union.

However, by 1984, China was no longer giving out giant pandas as gifts but began renting out pandas to nations for 1 million dollars each. And that is the status quo to date.

The aim is to allow China to dedicate more time and resources for the conversation of these animals in the wild.

It can be recalled that there was a tragedy involving the disappearance of a Malaysian plane MH370 in 2014.

Since the aircraft carried about 150 Chinese passengers, the news was well-followed by the Chinese citizens. It turned out that they were generally not pleased with how they perceived that the Malaysians handled the incident. As a result, the delivery of two panda bears was postponed.

This was a clear reaction of the Chinese with regard to the plane incident. But the giant pandas later arrived at their foster home in a Malaysian zoo. This somehow symbolized healing, forgiveness and acceptance between China and Malaysia.

The rentals of these pandas to foreign countries continues to breed a culture of a research-intensive environment for their benefit and protection. Although it’s a part of the loan agreement that everything must be returned. And by everything the terms mean even the hair follicles, blood samples, DNA swabs, and most especially any cubs borne in foreign lands must be sent back to China.

No doubt, pandas have become an important diplomatic symbol, not only to the Chinese people but the world in general.