The Red Panda is a beautiful creature native to parts of China and the Himalayas. 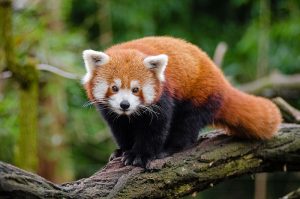 The Red Panda is a beautiful, little creature native to the eastern Himalayas and southwestern China. This mammal is just slightly larger than the average domestic cat and it’s easily recognized by its thick red/russet colored fur, long and very bushy tail, and bear-like body.

Red pandas are also commonly referred to as lesser panda in deference to the much larger giant panda. These are very acrobatic animals with expert tree-climbing skills.

It is arboreal (lives predominantly in trees), typically solitary, and mostly active from dusk to dawn.

There are less than 10,000 individuals of this species in the wild today and their population is under threat. In fact, the IUCN lists the red panda as Endangered as their population continues to suffer the effects of habitat loss, fragmentation, inbreeding depression, and poaching for its unique and beautiful fur.

They can live for between 8 and 10 years, though a few individuals lived up to 15 years old.

6) Interaction With/ Danger To Humans 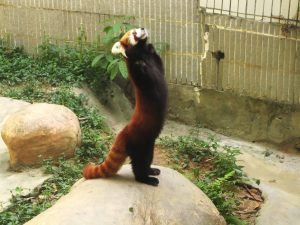 Like many other animals in the wild today, the red panda has also suffered its own share of the negative effects of human activities.

For one thing it was hunted almost to extinction for its pelt that is used in making fur hats and other fur garments.

To avoid further depletion of their numbers, this animal is now protected in the regions where it occurs.

When red pandas feel threatened, they will first try to escape by climbing up a tree, column, or rock. If they can’t run, they have an interesting habit of standing on their hind legs to look bigger.

Also, remember that though this creature is quite small and feeds mainly on bamboo, it is still built as a carnivore: it has sharp teeth and claws. It will use them to defend itself and it can inflict some nasty bites if provoked.

The major predators of the red panda are the snow leopard and humans.

Red pandas mature sexually quite early at just 18 months old, and they are fully mature at two to three years old.

Adults of both sexes don’t typically mix in the wild, except to mate. Mating season starts from mid-January to early March and both sexes may copulate with multiple partners during this time. Their gestation period lasts for about 4 to 5 months after which the mother will give birth in a nest built in a hollow tree or rock crevice.

Also, a typical litter will have anywhere from one to four cubs.

Newborn red pandas weigh just 110 to 130 g (3.9 to 4.6 oz.) each. They are nursed for about six to eight months and will remain with their mother till the next litter is born about a year later.

8) Diet Of The Red Panda

Red pandas are excellent and acrobatic climbers and as result, they forage mainly up in trees. Just like the giant panda, their diet is mainly bamboo but they will also eat small mammals, birds, berries, eggs, flowers, bark, mulberry leaves, and berries. They will also eat fish and insects when available.

Actually, red panda spend most of their time eating or sleeping due to their low-calorie diets. They are also one of the few animals that can detect artificial sweeteners in food.

Despite several efforts to reverse the trend, red panda populations are still on the decline in the wild.

IUCN figures estimate that the numbers of this panda could have decreased by up to 40 percent within the last 50 years. This is mainly the result of substantial habitat loss in their native Nepal, northern Myanmar (Burma) and central China.

Continuous poaching and human encroachment into their habitat are also major factors that exacerbate this situation. Presently, you can find red panda pelts for sale in local markets in China: this is one country where this panda is relentlessly hunted.

Also, despite their precarious conservation status, i.e. Endangered, they are often mistakenly killed after getting caught in traps set for larger game like wild pigs and deer.

They are poached for their distinctive pelts in China and Myanmar. You can still find red panda fur caps and hats for sale in Bhutan, for instance.

Classifying this animal was a tough task for biologists for many years ever since they were first described by a French zoologist, Frédéric Cuvier in 1825. They have the features of a fox, the face of a raccoon, and the body of a cat-sized bear! Consequently, it was placed in the raccoon and bear families initially.

Eventually, after some controversy and more DNA studies, the decision was to put red pandas in their own unique family called the Ailuridae. There was adequate phylogenetic evidence for this taxonomic classification. Though they still share the same superfamily Musteloidea with the weasel, raccoon and skunk families.

Interestingly, the red panda is not closely related to the giant panda.

There are two distinct subspecies of this animal:

This creature is endemic to the temperate forests of the Himalayas and its range extends from the foothills of western Nepal into eastern China. At the eastern peak of its range, it can be found in the Qinling Mountains of the Shaanxi Province in China.

Also, its range extends into southern Tibet, Sikkim and Assam in India, and Bhutan. You can find it in northern Burma, Southwestern China, in the Hengduan Mountains of Sichuan, and the Gongshan Mountains of Yunnan.

Its highest population concentration is an area in the Himalayas.

Wherever it’s found, the red panda lives at an altitude of between 2,200 and 4,800 meters (7,200 and 15,700 feet), in moderate temperature of between 10 and 25 °C (50 and 77 °F). This species prefers mixed deciduous and conifer forests in mountainous areas, especially with old trees and dense growth of bamboo.

Human activities have extirpated the red panda from the Chinese provinces of Guizhou, Gansu, Shaanxi, and Qinghai where it once inhabited.